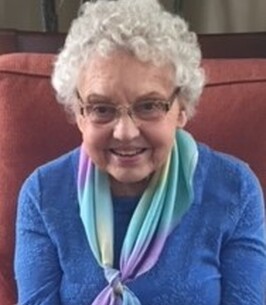 Jenny was born in Chicopee, MA on December 4, 1928. She was the daughter of the late Martin and Mary (Piechota) Pietras. Jenny was a 1948 graduate of Chicopee High School. She was a communicant of the Basilica of St. Stanislaus Bishop and Martyr and Member of the St. Vincent de Paul Society, the Rosary Society and the Bingo Committee. After 84 years in Chicopee, Jenny moved to Virginia to be with her daughter. She was one of the first residents of The Village at Orchard Ridge and enjoyed her new life there.

Jenny was a six year employee of New England Telephone and Telegraph Company and then a thirty one year employee of the Processing Department at Chicopee Savings Bank. After retiring, she worked with the Club Demo Service at Costco for seventeen years.

She is survived by her daughter, Carol Ann Carroll and her husband, Robert (Jack) Carroll, Jr. of Winchester; a brother, Edward Pietras of Severna Park MD and two grandchildren, Robert John (Rob) Carroll, III and Heather Ann Carroll; and several nieces and nephews.

Jenny is preceded in death by her husband, Frank J. Banas, who passed away in 1981 and her grandson, Ryan Francis Carroll.

A memorial service will be held on Monday, April 4, 2022 at 2:00 pm at the Chapel at The Village at Orchard Ridge with Rev. Bjorn Lundberg officiating. A Funeral Mass and Burial will be held at a later date in Chicopee, MA.

Memorial contributions may be made to Sacred Heart of Jesus Catholic Church, 130 Keating Drive, Winchester, VA 22601.