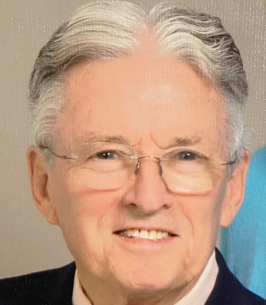 He graduated from Granby High School in Norfolk and then from the University of Virginia in 1960, where he was a proud member of St. Elmo Hall. Shortly after graduation, he went to New York City where he worked for NBC in the Advertising Department.

In 1964 he married Carolyn Terretta of Winchester and the next year he went to work at O’Sulllivan Corporation. He retired from O’Sullivan in 1997.

In addition to his wife, he is survived by his son, Phillip S. Griffin II; his daughter, Susan Terretta Griffin; and four grandchildren, Richard Henry, Edward Paul, Phillip Stone III and Lucy Caroline. He is also survived by a sister, Joel G. Amland, a cousin, Betsy Harris, and three nephews all living in the Norfolk and Virginia Beach area.

In the 1970’s Phil and Carolyn restored older buildings in the Historic District downtown and converted them into quality apartments. It became Phil’s retirement passion. The business continues to thrive to this day.

In retirement he enjoyed spending time on his boat, ‘Odyssey’, on which he and numerous friends and family would cruise up and down the Inland Waterway from Maryland to Florida. He and Carolyn traveled extensively over the years visiting over 50 countries and all seven continents. When the grandchildren were old enough, they enjoyed spending time every summer with their grandparents on a new adventure – Tanzania, Galapagos, Costa Rica, Germany, Italy, France, Russia, and others.

His civic involvement included long time membership in the Winchester Rotary Club, membership on the Economic Development Authority and the Chamber of Commerce. He enjoyed participating in the Animal Assisted Therapy program at the WMC with Barney, one of the family’s many Shelties. Together, Phil and Barney visited many patients at the Rehab Gym on Cork Street.

Phil participated in several events during the Shenandoah Apple Blossom Festivals and, along with his family, hosted many Apple Blossom festivities at their home over the years.

Sporting events were a big part of the family’s life, including attending the Olympics in Atlanta. They also enjoyed many years of traveling to ACC and Final Four basketball games. The family has maintained season tickets to the University of Virginia football games since the early 1980s.

Memorial donations may be made to the American Cancer Society or the Alzheimer’s Association.